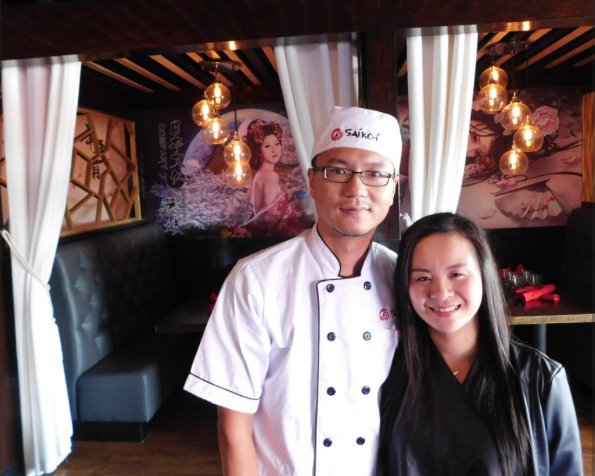 Posted at 13:05h in Uncategorized by shshi17

The husband-and-wife team behind the popular Yakitori Sake House in Boca Raton have opened a much bigger restaurant just a few miles away.

Tina Wang and Jason Zheng recently held the grand opening for Saiko-i Sushi Lounge & Hibachi at the renovated Shoppes at Village Pointe at 5970 SW 18th St., where the famous Gatsby’s Boca sports bar used to operate for many years. The couple spent about $1 million upgrading the 7,000-square-foot space, which seats about 228 indoors. They’re waiting on permits to open up covered patio dining in the coming days.

Wang and Zheng secured their newest east Boca Raton location about two years ago. A year later, they received the permit to begin building out the space. With a 10-foot Buddha statute, 11 hibachi stoves, a 580-bottle sake display case and Chinese wood panels on the ceiling, the interior renovations would take would take about 10 months to complete.

With Saiko-i, the couple aimed to fill a demand for hibachi in southeast Boca Raton.

“At Yakitori, a lot of people called for reservations and I had to say, ‘sorry, this is not a hibachi restaurant,'” said Wang, 35.

The couple, who married ten years ago and have two children, opened Yakitori nearly eight years ago at 271 S.E. Mizner Blvd. near Mizner Park. The two were born in China and met in New York, where Zheng was a sushi chef. Their family has restaurants in Long Island and it had been their dream to open a restaurant of their own.

Zheng got the opportunity to work at a sushi buffet in Miami, so the two moved to South Florida, but he felt creatively stifled. It was time to move on to their own venture.

At 2,000 square feet, Yakitori is much smaller than Saiko-i, but Wang said they are not having any trouble filling seats at both restaurants.

“We have a great team, that’s why we have been able to expand,” Wang said.

Wang and Zheng employs 25 people at Yakitori and hired 40 for Saiko-i. They’re considering another expansion and have looked at spaces in Fort Lauderdale and Delray Beach, including the site previously occupied by Rocky’s Italian Bistro and Bar at 20 S.E. 5th Avenue.